I saw these in the store and wanted to share it with you all.

Gung Hay Fat Choy! (I know I know…It’s Cantonese when I am learning Mandarin. Oh well, it’s the one I know how to say.) Happy New Year everyone! Last night, we attended a banquet that was for the international students of Xiamen University. We got to toast to the new year with the president of the university. He came around to our tables. The food was so good! It was a 14 course meal. We had crab, shrimp, soup, duck, pot stickers, fish…the list just goes on. 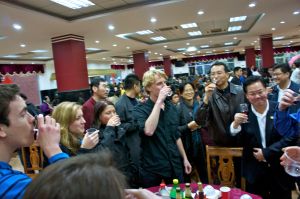 Toasting to the new year

After dinner, at about 7 or 8pm, we tuned into one of the main tv channels in the guys’ suite and we watched this tv program that they put together for this. SO much more entertaining than watching the ball drop at midnight. There were comedy skits, music, dancers, etc. It was really cool. Think Beijing 2008 but with less people and at a smaller scale. I think that all of sixteen of us were in that little room at one point. We didn’t understand basically all of it, but some of the group was coming up with commentary for it. Some was way out there, but some of it actually wasn’t that far out of the ballpark. One we got pretty close to figuring out. I stayed up watching it till midnight with some of the guys. 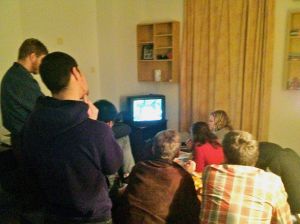 Tonight, all of us walked towards the convention center. We didn’t make it all the way before the fireworks started. So, we found a raised hill on the side of the street to go up on, and we watched the show from there. The fireworks were cool. There was a ton. The show went for about 40 minutes straight. However, as we were walking back, I saw some more going off behind us. Spring Festival has begun. Classes resume in the morning for those of us in CSP, however, the rest of the campus won’t be coming back until sometime in February when their classes start back up again. Well, I need to do my reading for tomorrow’s afternoon class. The year of the Dragon has started. Happy New Year! 🙂 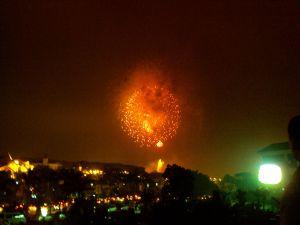